One of the most beautiful area of our website. We have wallpapers of Waterfall, Landscape, Sunrise, Sunset, Mountain, Flower, Cloud and the pictures of all the beautiful things nature has to offer.
Post Reply
1 post • Page 1 of 1

When you think of China's landscapes, tropical islands are likely to be one of the last features that springs to mind. But the Chinese territory does surprisingly include one enchanting tropical island, and it attracts 25 million tourists a year thanks to its picturesque sights, including jaw-dropping highlands, dazzling lakes and sensational mountains.

Located in the South China Sea off the southern mainland, Hainan is the second largest island in the area after Taiwan - spanning 35,000 square kilometers, and is also China's smallest province. It is largely considered China's "Hawaii" or the "Eastern Hawaii" especially since its sits on the same lines of latitude to Hawaii itself, and benefits from warm weather all year round.

There are many reasons why tourists should be drawn to this gem of an island, outside of China seem to know of its existence. Those that do visit often stick to the coast and therefore miss out on the exceptional inland sights offered by the island. There are countless landscapes in Hainan just waiting to be discovered, as well as food, culture and other experiences that will make this paradise your ultimate travel destination. Here's a taste of what you'll find there. 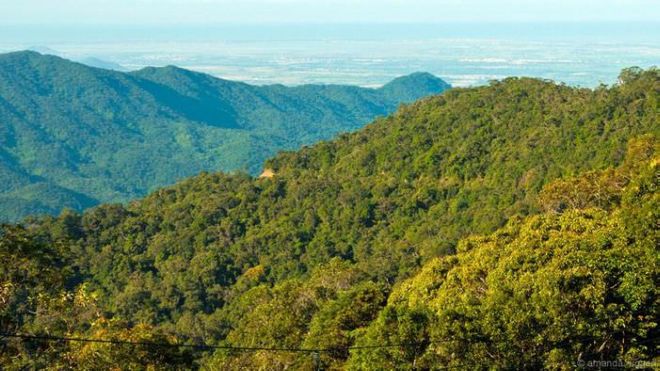 Although it's got 1,500km of charming coastline, there's nothing that should stop you from exploring the island's interior. The good thing about doing this is that you can enjoy the lakes, rice paddies and mountainous landscapes without a tourist in sight. This is because Hainan's incredible interior is still only known to some, since most tourists are (understandably) attracted to its beaches. 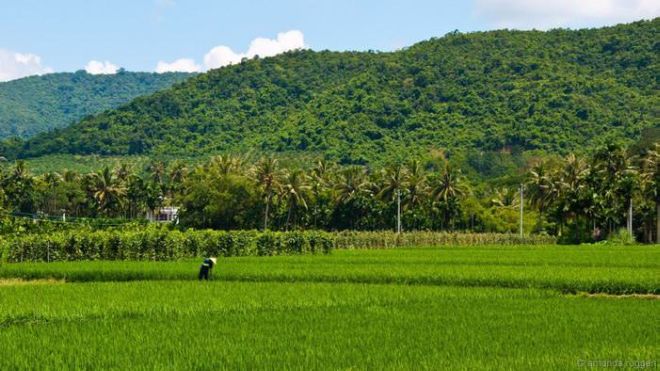 Apart from having fast-growing tourism contributing to the island's GDP, farming also happens to play a huge role in it. With its verdant fields, agriculture still brings twice as much money into Hainan's economy than tourism does. Farmers on the island have no time to enjoy the shops and beaches, they spend their days working hard, cultivating widely-exported crops such as rice, coffee, pepper and tea. 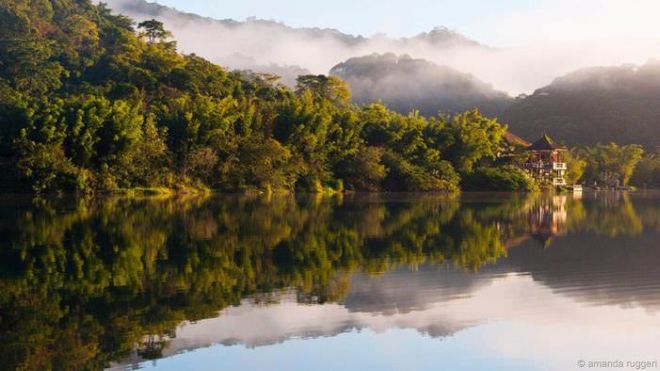 Located 100km northwest of Sanya (a seaside city reminiscent of Miami), one can find a hidden marvel amongst the soaring, rainforest-covered mountains of Hainan. There is nothing but the picturesque lake called Tian Chi, literally translated as "Heaven's Lake". Your eyes will be out on stalks as you look at the shimmering water reflecting the green, rainforest surroundings of this enthralling lake. You'll think you're in heaven! 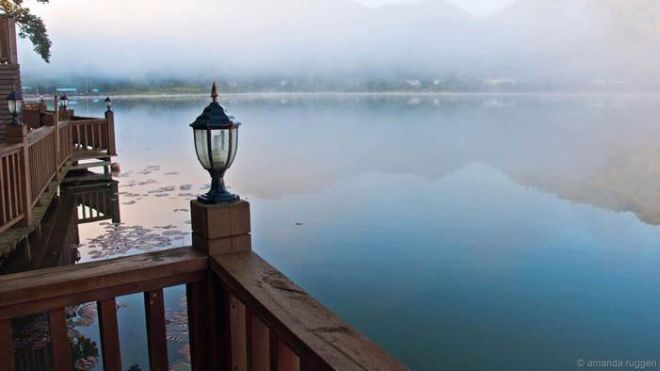 Because it's some 960m above sea level and surrounded by rainforests, one can only imagine how Tian Chi looks early in the morning. Floating gloriously above the lotus-spotted water surface are clouds of mist, creating the illusion of heaven - as if this place isn't heavenly enough. To wake up to this experience, you can book a night at the Tian Chi Tao Yuan Hotel, where an early stroll along the wooden walkways is sure to start your day off on the right footing. 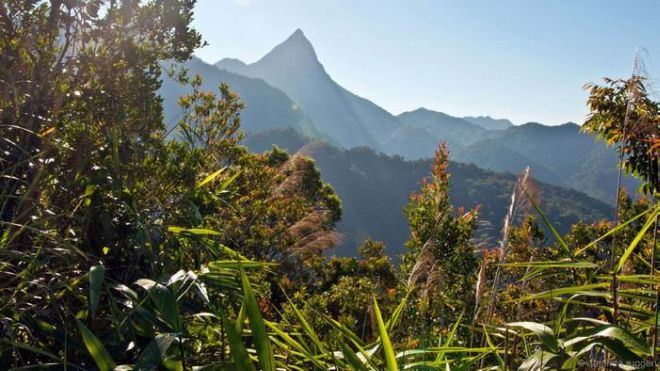 The forest where Tian Chi is located, Jianfeng Ridge National Forest Park, is one of the five national forests found on Hainan. The 400 square kilometers it spans is predominantly occupied by trees, with the 1,412m-high Jianfeng mountain visible above the treetops in the distance. It's also home to a butterfly valley, where you can bask among the 449 kinds of colorful butterflies found there, making it a remarkable "Kingdom of Butterflies". 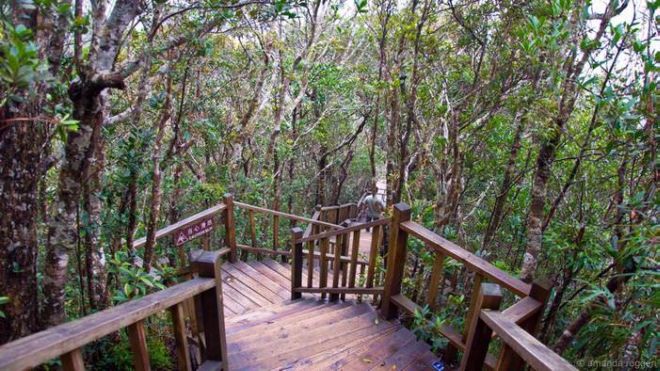 If you're a fan of nature, Hainan won't let you down. Reward yourself by a spectacular 360° view from the high peak of Jianfeng by taking a 425m, 2.5-hour-long hike. Because of its unique ecosystem, the average temperature of this park remains around 19.7°C, even when temperatures are sky high along the coast. From up here, you can catch a glimpse of the sea 16km away, while enjoying the jaw-dropping mountainous scenery that surrounds you. 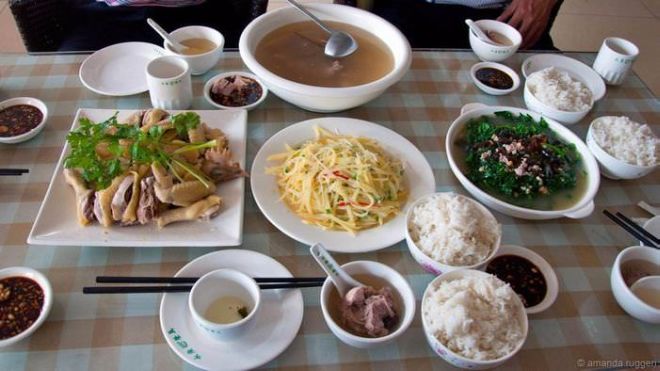 Experience the traditional dishes of Hainan by making a stop at the restaurant Min Xin Jin Le, found in the village of Jianfeng on the edge of the national park. Among their specialties are a choice of local greens with preserved eggs and minced pork, julienned potato and Wenchang chicken that have been fed with banyan seeds, coconut or peanut bran. There's a tradition that follows that the chicken's head (seen on the left side of the photo) has to be served facing the guest of honor or the most important guest at the table. 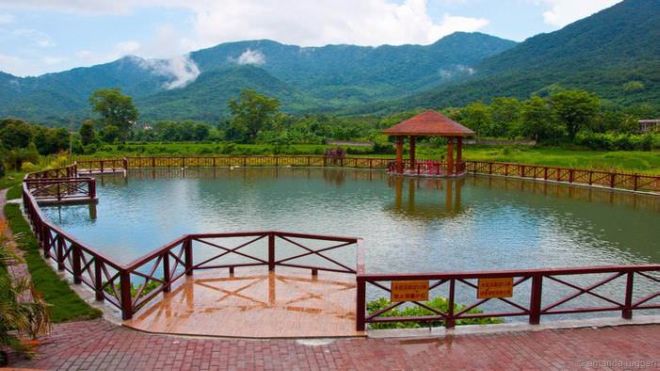 Certainly, you can't enjoy delightful food without tasting the outdoors. Right behind this restaurant is this luxurious view. The air here is so pure you can almost drink it in, and the sight of this island's splendid scenery is beyond magnificent. 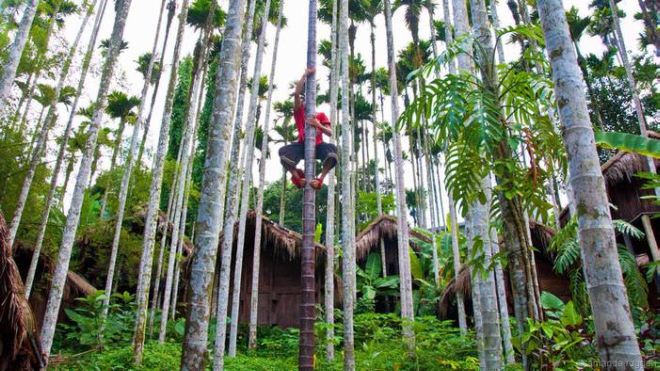 Hainan's first settlements were inhabited by what the locals call "minority people". These include one of the biggest ethnic groups, the Li, who had been living there since 7,000 BC and spoke five dialects - Ha, Qi, Run, Sai and Meifu. Today, all of the Li villages have vanished, but there's one rather commercial way tourists can still experience this culture. In Binglanggu, the Li and Mao minority village 30km northeast of Sanya, one can see a young man demonstrating one of the traditional ways Li men used to impress women: by climbing a tree to pick betel nuts - nuts that are eaten by many locals due to its stimulant properties. 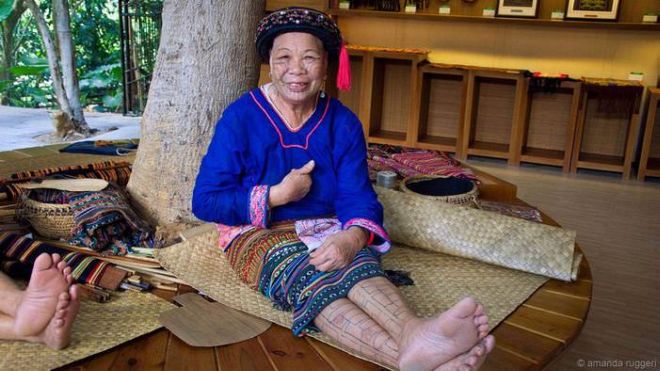 In order to show their inclusion in the kinship group, Li females used to tattoo themselves from as young as eight years of age. By the age of 16 or 18, when a Li girl would typically get married, most of their body would be covered in designs, which varied according to family. This 79-year-old woman, who is one of the only women left who had practiced such a tradition, showcases a perfect example of this art. 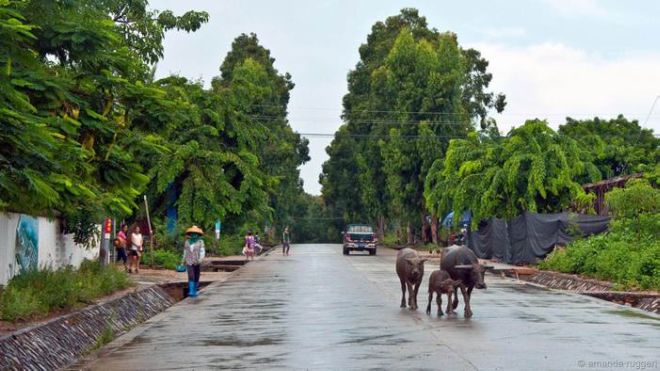 Although Li settlements are no longer found, Hainan boasts several villages that exemplify the island's culture. It's not unheard of to find livestock such as goats, cows and chickens, roaming about in the streets of old villages - these are the sights that remind you of the original highland life of centuries gone by.

And finally, the beautiful coastline. 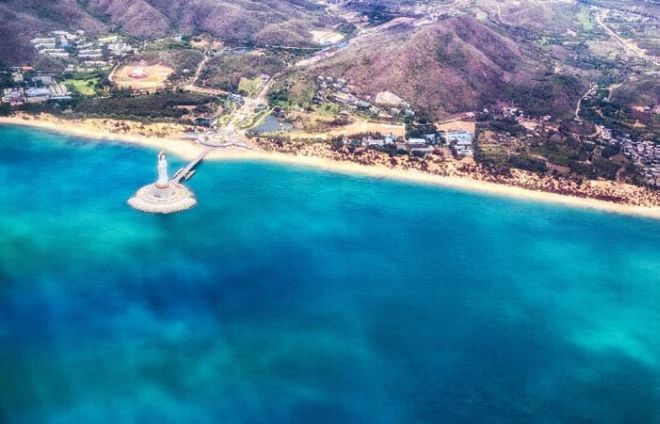 Once you know what Hainan is all about - having savored the food and taken a glimpse at its culture and rich interior - you can be sure to have experienced Hainan to the fullest. Well, almost at least! Your trip would not be complete without a visit to its astounding coastline and a dip in its brilliant blue waters.

Users browsing this forum: No registered users and 7 guests