100+ Years Old People Share The Secrets Of Their Long Life


100+ Years Old People Share The Secrets Of Their Long Life

More often than not, the oldest people in the world don’t even know they’ve earned the title unless the Guinness Book of Records’ people call to let them know, or a reporter comes a-calling. Undoubtedly, we can all learn from their wisdom and experience, and we are lucky that so many of them have been happy to share their advice in their old age. These are the secrets to longevity, as told by 10 of the oldest people ever recorded, three of whom are still alive today. 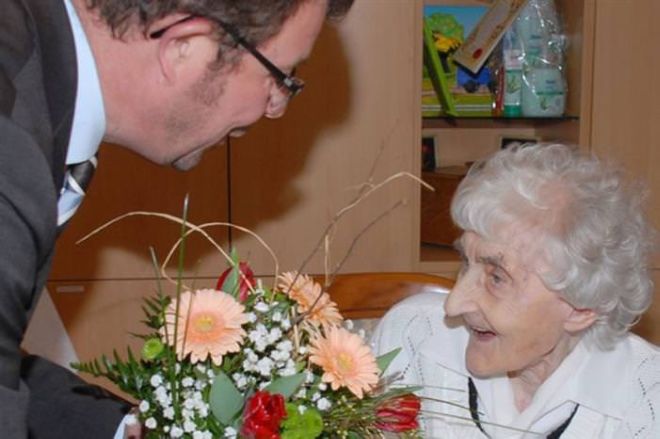 Johanna was the oldest person in Germany, before she died in February 2015, aged 112. She married three times and had only one daughter (an uncommon thing for long-living people). Johanna lived in a nursing home from 2004 onwards, but remained in good physical and mental health until her last days.

Johanna’s secret in her own words shortly before she passed away: “I feel great, like I’m 60 years old and just retired. My secret to a long life is a plain and light diet, and especially only using a few drops of oil or butter in the soups I make.” 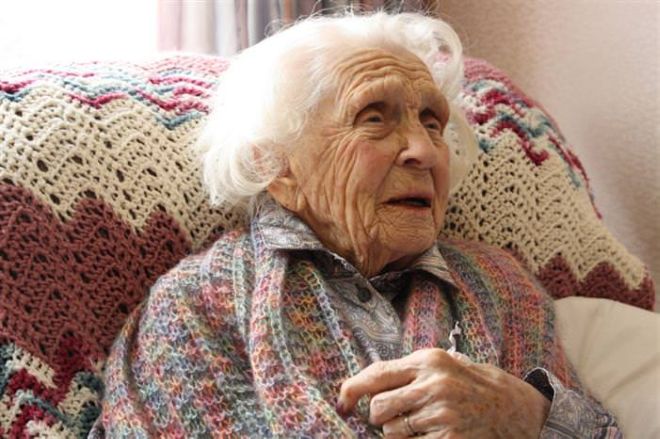 Orma was born on February 19, 1903 in Canada, just several months before Orville Wright flew the first airplane in history. She was 20 when the Great Depression started and 66 when humanity landed on the moon. Orma was a teacher and retired at the age of 64, then traveled the world with her husband (who passed away in 1988). She also volunteered at the Bellville hospital until she was 104, and only stopped because she could not find a ride to the hospital. Orma enjoyed life until the very end, and even went skiing when she was 109, before passing away in 2015, aged 112.

Orma’s secrets in her own words shortly before she passed away: “Ever since I was a child, the world did not change for better or worse. Things don’t change, so go with the flow. I’ve never done anything special to help me get to my age, but the secret may be my positive attitude to people and life. I don’t recall ever saying a bad thing about a neighbor, family member or a friend”. 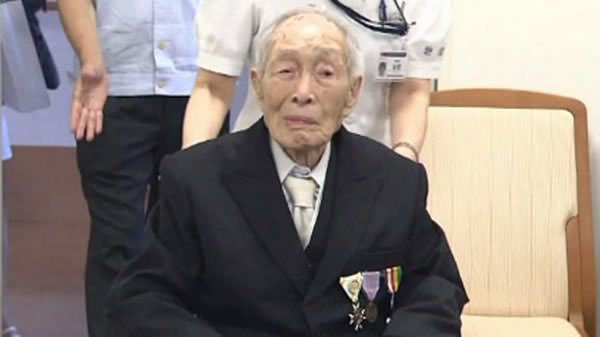 Sakari was the oldest living man in the world, before passing away in July 2015, aged 112. Born on February 5th, 1903, Sakari worked his whole life as a teacher and later as a principal until he reached retirement. Mr. Momoi is verified as one of the longest living men in recorded history.

Momi’s secret in his own words, a couple of years before he passed away: “I do not know the secret of my long life, I simply haven’t died yet. I used to always exercise, eat in moderation and never consumed alcohol, but that’s just my way of life, not some great secret.” 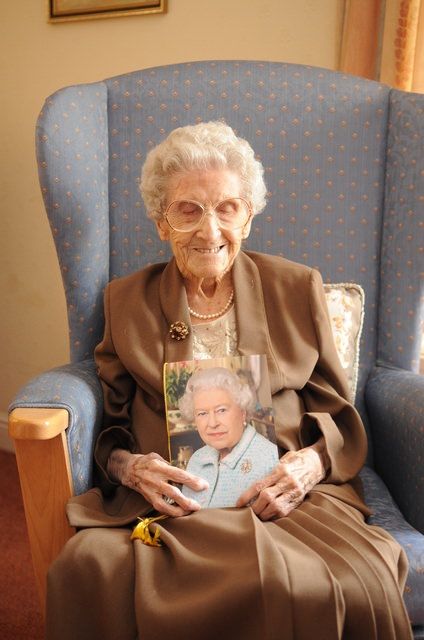 Born on May 27, 1900, Ethel was the oldest person in England and the second-oldest person in Europe before her death in January 2015. She was the last living Briton born during the reign of Queen Victoria. Ethel left school at the age of 13 and went on to work in a shirt factory, where she remained throughout WWI. Many of the relatives on her father’s side enjoyed a long life.

Ethel’s secret in her own words shortly before she passed away: “I’ve never smoked and barely touched any alcohol. I drink a lot of tea, cook my own food, even the bread. Ever since I can remember, I was always in motion and had ever gotten fat. I was always taking an interest in people’s wellbeing and loved to go out and dance. Last time I danced was when I was 107.” 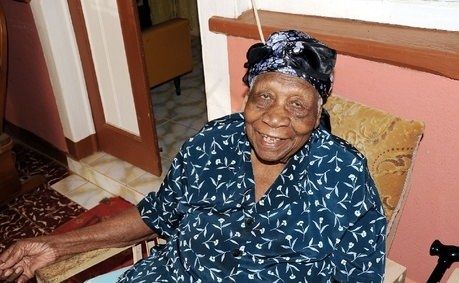 Violet was born on March 10th of 1900, and still remembers the days she had to get up early in the morning and walk 3 miles barefoot to get her family water so she can get back home by 9am to go to school. This Jamaican lady says that: “Today’s youth don’t know how easy their lives are. They have plumbing in every home and buses going everywhere. Sometimes I think about the past and cry for all the hardships I had to endure”. Violet was born when Jamaica was still part of the British empire, and is the last surviving subject of Queen Victoria.

Violet’s secret: “These days I enjoy reading (without glasses) and reciting poetry. My secret to longevity is my faith in the good Lord and his commandments. If I have a message to share, it’s ‘Honor thy father and thy mother’. That’s probably the most important commandment.” 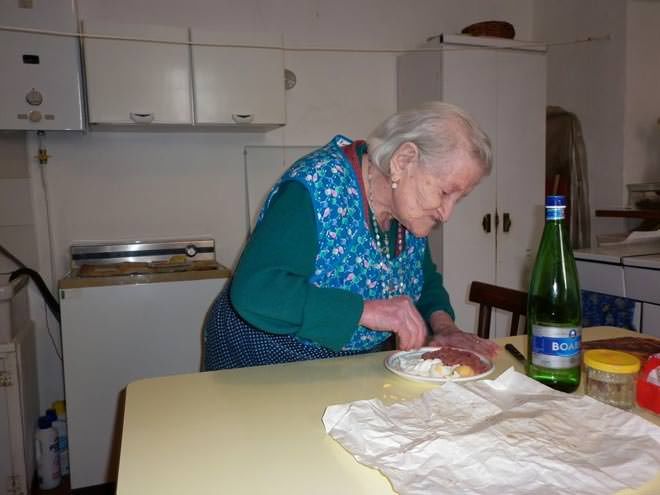 Emma is the oldest person to ever have lived in Italy, and the last remaining European born in the 19th-century (November 29th, 1899). Emma was only married for 11 years, but being a Catholic, she did not believe in divorce, so she only kicked her husband out of the house and remained married until he died in 1978. Their son died at six months, and Emma has stayed in her marital home ever since. She still lives alone, aged 115 years.

Emma’s secret: “I never touched drugs and only drank brandy that I make at home. I eat three eggs every day and treat myself to chocolate sometimes, but mainly, I think it’s my positive thinking about the future that kept me alive for so long.” 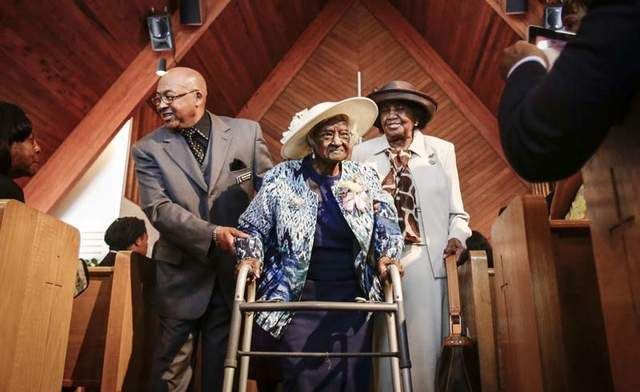 Jeralean was recognized as the oldest person in the world between April 2015 and her death in June of the same year. She was born on May 23rd, 1899 and said she had never driven a car since the first time she tried, when she accidentally used the wrong pedal, causing the car to reverse, which scared her. She’s not sorry about it.

Jeralean’s secret shared when she was 114: “I never stop moving, and even today I keep my hands busy by knitting. I played bowling until I turned 104, but my legs have gotten weaker since then. I sometimes go fishing with my son-in-law and grandson and even caught seven fish last time. I only have one golden rule for life: Treat others as you would have them treat you.”

Officially recognized as the oldest living person in the world, Susannah was born on July 6th, 1899. Her grandfather was a freed slave who became a farmer, later run by her parents. Susannah did not want to be a farmer, so after finishing school in 1922, she decided she wanted to be a teacher. Sadly, her parents couldn’t afford to pay for her studies, so she moved to New York, got married and five years later got a divorce. Since then she has been living alone, and has been working as a nanny for $7 a week.

Susannah’s secret: “I visit the doctor only four times a year and don’t use any medication except for blood pressure medication. When I turned 100 I lost my eyesight to diabetes, but I refuse to take medication or have a surgery for it. My whole life I avoided cigarettes, alcohol, makeup and even hair dye. I get 10 hours of sleep every night and not being married also helps.” 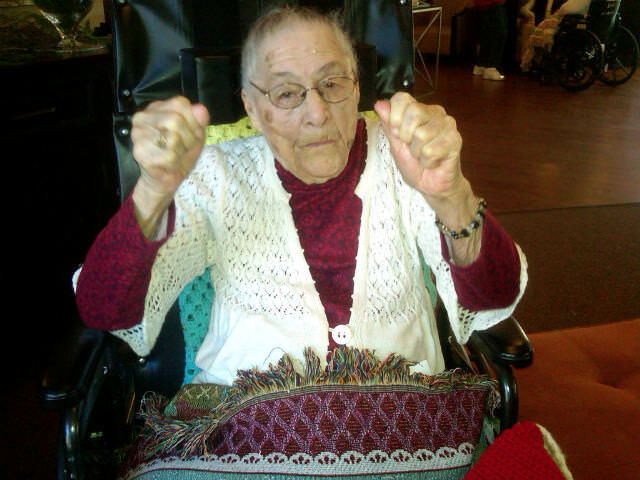 One of the oldest recorded people to ever live, Gertrude was born on the 4th of July, 1898. Gertrude had four children, only one of whom survived her, turning 94 the day after her own death in April 2015. When Gertrude was 104, she moved to a nursing home, and despite not having any chronic diseases, her age affected her health in later years (quite understandably). Despite that, she still left her room and participated in the activities at the home up until her final days.

Gertrude’s secret shared when she was 114: “My secret is faith in God, hard work, loving everyone and always do as much as you can, and if you can’t, don’t do it.”

On her 116th birthday, Gertrude received a letter from President Barack Obama, informing her that from that point on, that day is official “Gertrude Day” in the USA." 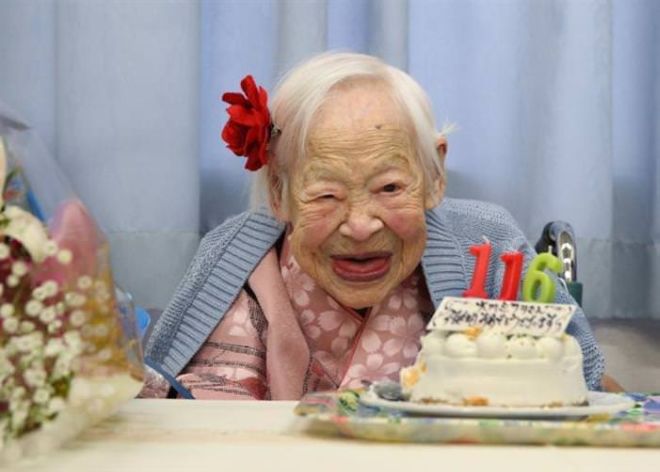 Misao Okawa was the oldest living person in the world between June 2013 and her death in April 2015, and the 5th oldest person ever verified. At 102, Misao was still regularly exercising ,and she was able to walk on her own until she was 110. In later days she used a wheelchair because she had a hard time keeping her balance, but insisted on using the chair on her own and refused to ask for help.

Misao’s secret shared when she was 115: “The reasons I survived for so long are sushi and a good night’s sleep.”

So who knows, maybe we just need to eat more sushi and sleep well every night, and we’ll all still be walking freely at 110 years old. Either way, one of the oldest people of all time seemed happy and full of life well into her hundreds, which seems to be the main message of most of the people on this list, above all diets and such. So the secret to a long and happy life is just to be kind to yourself and to others.